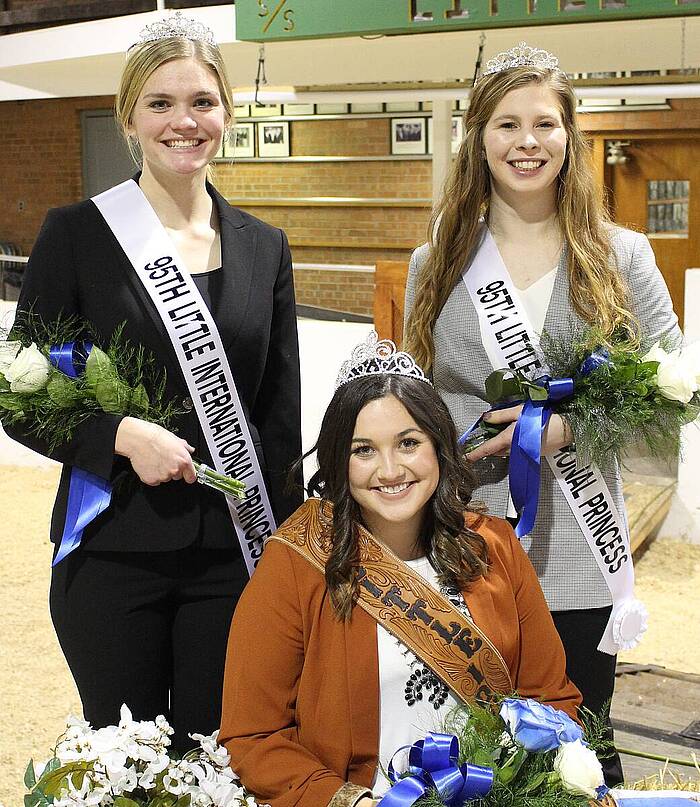 The royalty for the upcoming Little International have been named. The NDSU Saddle and Sirloin Club’s annual livestock showmanship competition scheduled Feb .13 on the NDSU campus.

Samantha Pernsteiner, a senior majoring in agriculture economics and minoring in animal sciences from Monango, North Dakota, was selected as the 95th Little International queen.

Princess Annabelle Hardwick of Mantorville, Minnesota, is a senior in university studies with an emphasis in agriculture business, with minors in animal science and history.

Princess Madeline Patterson of Kenyon, Minnesota, is a senior in agriculture communication, with a minor in animal science.

“The Little I royalty serve as the faces of Little I and are the primary spokespersons for our club and the show,” said Brooklyn Vollmer, royalty chair and senior in pharmacy from Wing, North Dakota. “They promote Little I, agriculture and animal husbandry throughout the Fargo-Moorhead area by doing TV and radio interviews. They also help educate children about agriculture by putting on events such as the coloring contests and attending 4-H club meetings.”

Since 1922, the Little International show has grown to consist of showmanship competitions in beef, dairy, sheep and swine as well as public speaking, ham curing, hippology and photo competitions. More than 300 Saddle and Sirloin members and 30 committees work on the annual event.