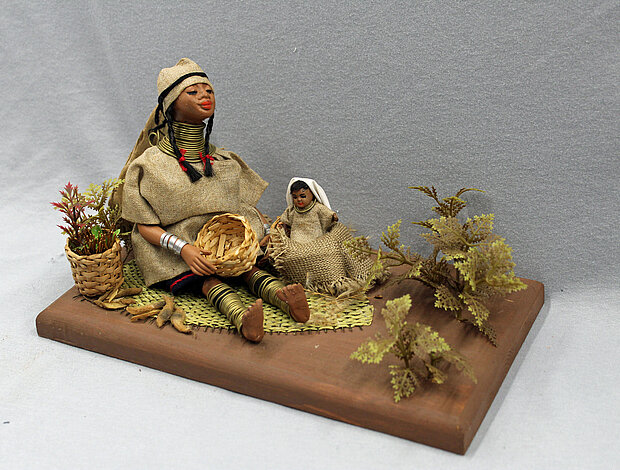 A gift that demonstrates and celebrates the diversity of dress around the world has been donated to NDSU’s Emily Reynolds Historic Costume Collection.

Ethnic dolls sculpted by Wisconsin artist Joan M. Beringer Pripps, who died in 2005, were donated by Luise Beringer. She gave the dolls in memory of her husband, Richard E. Beringer Chester Fritz Distinguished Professor of History at the University of North Dakota from 1970-1999, who died in 2020.

The artist and Richard E. Beringer were cousins.

“The Beringer Pripps doll collection is unique because the creator of dolls is usually unknown,” said Ann Braaten, curator of the Emily Reynolds Historic Costume Collection. “These dolls provide evidence of an artist’s body of work and decisions she made when sculpting and dressing human forms to represent the ethnic groups depicted.”

Beringer Pripps studied at the Milwaukee Art Institute and Mount Mary College, Milwaukee, establishing herself as a successful portrait painter. She also was a doll maker, landscape and still life painter, potter and illustrator. She began creating dolls depicting historic and ethnic figures in 1931 when she was 17 and continued throughout her life.

A selection of Beringer Pripps ethnic dolls is on display in the Around the World Doll Collection display window on the second floor of Evelyn Morrow Lebedeff Hall. These groups are represented: Padaung (Kayan) mother and daughter of Myanmar and Thailand; probably Afar women from the Horn of Africa; Korean women of east Asia; Amish woman and children from U.S.; and a Karagouni woman from Thessaly in Greece.

In October 1947 Beringer Pripps, created doll figurines of prominent Wisconsin women as a way to celebrate the Wisconsin State Centennial in 1948. She made 70 of the dolls to illustrate a series of presentations she gave, some of which are now part of the Wisconsin Historical Museum collection.

The Beringer Pripps dolls will be on display through April 2022.