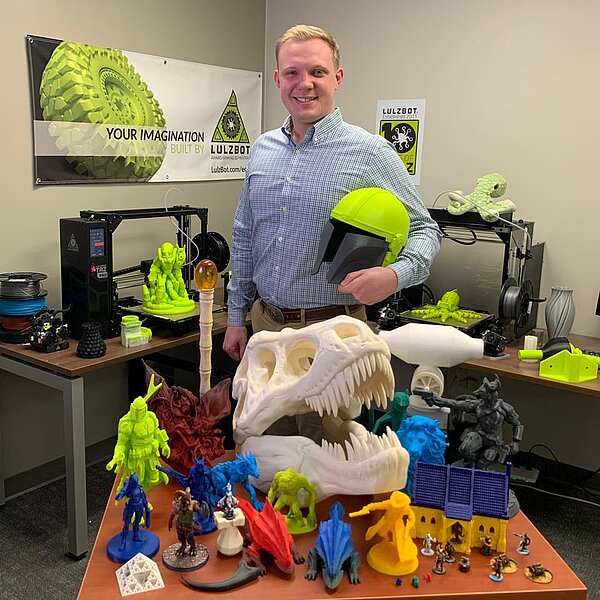 NDSU alumnus John Olhoft is at the epicenter of the 3D printing universe. As president of Fargo’s LulzBot and its parent company, FAME 3D, his NDSU degree has been indispensable.

“The engineering degrees at NDSU prepare you to be a professional problem-solver,” said Olhoft, BS ’17, agricultural and biosystems engineering. “It doesn’t matter what the issue is, you’re able to take all of the given information, assess what you’re trying to find out and then develop a solution.”

Those steps are fundamental, he said, in any engineering career.

“When we’re designing, developing and deciding if what we’re making is a good idea, or if we’re vetting a supplier or a decision on material choices, that technical background is invaluable. It provides me with the ability to interpret what I’m faced with, take a technical approach and use that to say if this is possible or if it’s a bit far-fetched,” he said.

Olhoft, who is now pursuing an MBA at NDSU, knew little about 3D printing in college until a fraternity friend used a homemade 3D printer to replicate a miniature boat.

“My mind was blown,” Olhoft said. “The next day, I want over to Fargo 3D Printing and I said, ‘You’re hiring me. I need to learn more about this.’”

He worked part time at the company fixing 3D printers, and then took a winding path back into the industry after college. Olhoft interned for Cargil, then took a job in the food production industry upon graduation and later returned to Fargo.

He started his first company, Fargo 3D Printer Repair, in 2018 with his father and NDSU senior lecturer Matt Olhoft.

In November 2019, Olhoft and two partners, Cooper Bierscheid and Ron Bergan, formed FAME 3D to purchase the LulzBot brand’s assets. They packed the company’s equipment on 28 semis in Loveland, Colorado, and moved everything to Fargo, opening in the new location Jan. 1, 2020. The new company built its first 3D printer two weeks later.

“At this point, we are the biggest and one of the only desktop 3D printer manufacturers in the U.S.,” Olhoft said, noting the company has five different model lines. “This past July, we launched a brand new printer that is 100 percent Fargo-designed, Fargo-built. We do all business operations here in Fargo. Our newest model is the most affordable printer we’ve ever made, so we’re hoping for a lot higher volume on that line.”

With just over 75 employees, LulzBot utilizes an onsite print farm with 300 printers to manufacture many of its own parts to build its printers.

With so many applications, the world of 3D printing is endless.

“I think it’s set for some pretty explosive growth yet again. During COVID, you saw the need to make a lot of things fast. We’re also entering a time where there’s a lot of supply chain shortages and the one thing we haven’t had to do is slow down,”Olhoft said. “As long as I have raw plastic, I can turn it into whatever I want.”

Among LulzBot’s clients are universities, schools, the military, hobbyists, hospitals and large manufacturers, such as Tesla, John Deere and Ford.

And it all started at NDSU.