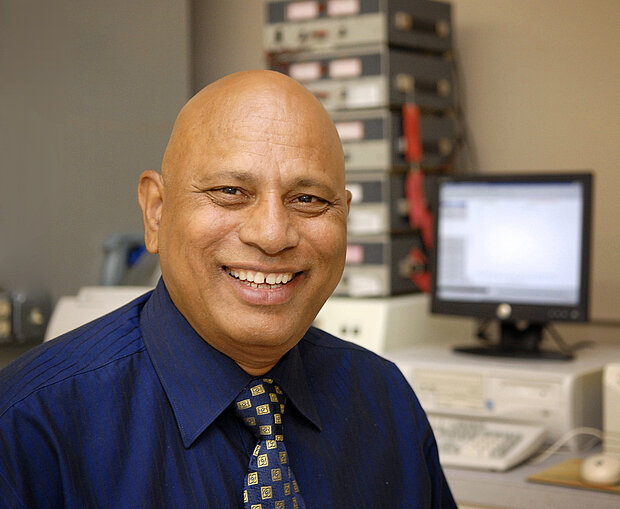 Dr. Jagdish Singh, chair and professor in the Department of Pharmaceutical Sciences in the NDSU School of Pharmacy, is receiving a federal grant of more than $1.4 million for three years and the potential for additional funding from the National Institutes of Health for Alzheimer’s disease research. The grant from NIH funds research titled “Enhanced APOE2 Expression into Brain for Therapeutic Strategy for Alzheimer’s Disease.”

Neurons carry information in the brain and communicate with each other at junctions called synapses. Think of it as an information superhighway where packets of information traveling through your brain are directed through these junctions to carry messages that control functions of the brain and of the body.

A protein called Apolipoprotein E (APOE) plays a critical role in maintaining the plasticity of the brain’s synapses, along with maintaining neuronal function. Studies have shown that APOE2 is more prevalent in people aged 100 or more and is associated with making them less susceptible to Alzheimer’s disease.

Additional research studies suggest that APOE2 is neuroprotective, meaning it could positively impact cognitive functions in aging. It may be possible, according to Singh, to increase the APOE2 level in the brain as an effective therapeutic strategy against Alzheimer’s disease.

“Although gene therapy possesses immense potential of treating various neurodegenerative diseases including Alzheimer’s disease, its clinical application is limited, mainly due to lack of safe and effective vectors that can efficiently deliver the therapeutic gene across the blood-brain barrier,” explained Singh.

To breach the barrier safely to deliver such therapeutic agents to the brain, Singh’s long-term research goal focuses on designing a gene delivery carrier that can efficiently deliver plasmid DNA encoding APOE2 to the brain to help prevent and treat Alzheimer’s disease.

“The research of Dr. Singh and his lab places the NDSU College of Health Professions and its Pharmaceutical Sciences Department at the forefront of adding to knowledge that may one day help find a better treatment for debilitating mental health conditions such as Alzheimer’s disease,” said Dr. Charles Peterson, dean of the School of Pharmacy and the College of Health Professions at NDSU.

Singh serves as co-principal investigator of the NIH grant to NDSU to conduct Alzheimer’s disease research. Takahisa Kanekiyo, M.D., Ph.D., at Mayo Clinic in Jacksonville, Florida, serves as co-investigator for this research. Dr. Buddhadev Layek, assistant professor in Pharmaceutical Sciences at NDSU, serves as part of the faculty team.