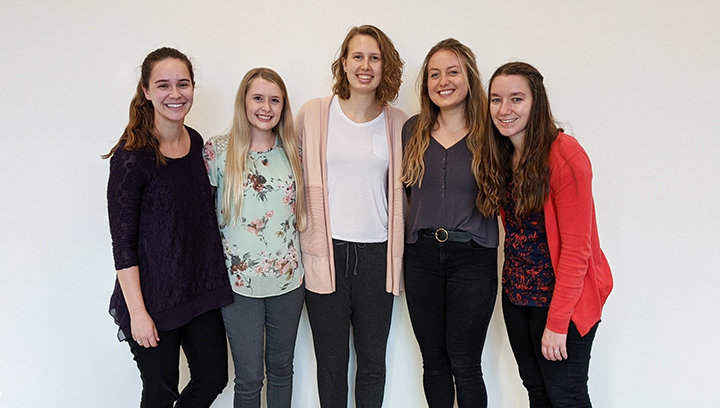 A team of fourth-year NDSU pharmacy students competed in four online rounds, making it one of the Top 16 teams in the American College of Clinical Pharmacy Clinical Challenge.

The Challenge is a national event open to all 130 schools of pharmacy in the country and is held over a one-week period each September.

“In the roughly 10 years this event has been held, this is the first time NDSU has made it to the fourth round,” said the student organization advisor, Dr. Donald Miller in the NDSU School of Pharmacy.

“We had a really outstanding group. Their fourth-round score just missed moving to the top eight during the event,” said Miller.

“I relied on my coursebook to review some challenging topics. I also have been learning a ton from my rotations by viewing the information that I have studied be put into practice,” said pharmacy student Lauren Nordberg who participated, along with team members Gabrielle Coudron, Amanda Nies, Eva Byerly, and Jennifer Spadgenske.

“I think our team was well-rounded in our clinical knowledge,” said Nordberg from Bismarck, North Dakota. “We respected each other's opinions and were also able to communicate properly throughout the rounds. Good team chemistry for sure - lots of laughs even during a competition. Our mentor, Dr. Miller, also had great confidence in us and that made us more confident going into each round.”

In the Clinical Pharmacy Challenge, teams compete in three segments for each round, including a Trivia/Lightning round, a Clinical Case, and a Jeopardy-style segment. With each round, half the teams competing are eliminated.

According to its website, “the American College of Clinical Pharmacy (ACCP) is a professional and scientific society that provides leadership, education, advocacy, and resources enabling clinical pharmacists to achieve excellence in practice, research, and education.”